Constitution Day is a celebration of the formation and signing of the U.S. Constitution by 39 of the 55 Delegates to the Constitutional Convention on September 17, 1787. The date is also designated Citizenship Day to focus on the rights and responsibilities of citizens under the Constitution.

Student Engagement and Student Affairs work with faculty and staff to develop presentations on topics such as free speech, partisanship in the Supreme Court and offer the students the opportunity to Register to Vote.

Seven years before the ratification of the 19th Amendment, Jane Addams criticized the policies men had enacted with control of government.

Addams argued men had wasted money on military weaponry instead of education, prioritized profit over the health and safety of workers, and designed the criminal justice system to seek revenge instead of educating and reforming offenders.

After a century of women's suffrage, how have things changed?

Hosted by the NSU Department of Geography & Political Science

Record yourself reading part of the Constitution and send it to engagement@nsuok.edu to be featured.

Come get a free copy of the Constitution from 11:00am-1:00pm outside of the University Center. 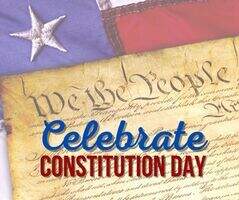 Constitution Day is the day that recognizes the ratification of the United States Constitution, and also recognizes all who have become citizens due to either coming of age or naturalization.